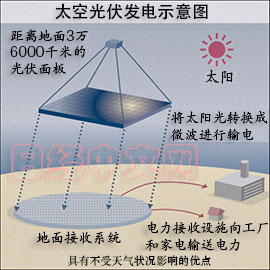 Although the implementation of space photovoltaic power generation is believed to be as long ago as 2040-2050, wireless transmission technology is also expected to be used to transport power to islands and mountains. Therefore, Japan will accelerate the practical application of this technology.

The "IHI AEROSPACE" promotion agency for the development and utilization of space systems will also participate in the experiment. A small device that simulates the transmission of power from space into the ground will be made, converts the power into microwaves, and then transmits them to a power receiving antenna about 50 meters away from the conveyor.

It is critical that the ground antennas be accurately delivered from the distant space to the ground. The experiment will continue from December 5 to March 2015, and will verify whether it can precisely control the direction of the electric wave and efficiently convert the electric wave into electricity.

In order to realize space photovoltaic power generation, it is necessary to minimize the size and weight of equipment that needs to be transported by rockets into space. Judging from the current technology, various equipments are extremely large. If the photovoltaic panels with the power generation capacity equivalent to a nuclear power plant or thermal power station are to be installed in space, the launch cost alone will be as high as 1 trillion to 2 trillion yen.

The Ministry of Economy, Trade and Industry of Japan will formally launch a small-scale and lightweight research and development based on the results of terrestrial wireless transmission experiments, and strive to reduce the weight of transmission devices to the current level of about one-fourth.

The Ministry of Economy and Trade plans to carry out space transmission experiments in the latter half of 2030 to 2040 and push it into practical use after 2040. In order to achieve the above goals, it is planned to formulate a specific schedule next year.

Space photovoltaic power generation was proposed by American scholars in 1968. In addition to Japan, the United States, Russia, and other countries are also actively researching and developing. In recent years, the competition has become increasingly intense.